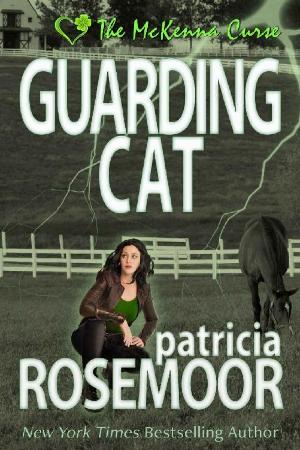 June 22, 1919
Donal McKenna,
Ye might have found happiness with another woman, but yer progeny will pay for this betrayal of me. I call on my faerie blood and my powers as a witch to give yers only sorrow in love, for should they act on their feelings, they will put their loved ones in mortal danger.
So be it,
Sheelin O'Keefe

Excerpt:
"Pegeen would have loved to ride you," Aidan McKenna said past the lump in his throat as he led Mac Finnian into his stall after his morning workout and cooldown.
Mac snorted and pranced in his stall, ready to run again.
Indeed, Aidan could read him, had been able to do so since the black colt was born. He'd always had a connection with the horses he trained-he was a McKenna, after all-even if that particular ability was less developed than that of his brothers. He, instead, wrestled with dreams and nightmares, trying to decide which were true portents of the future and which were figments of his overwrought imagination. Sadly, he didn't always get it right. But he didn't want to think on it now-didn't want to remember his tragic mistake with Pegeen.
Instead he concentrated on the strong connection he had with Mac, the only McKenna ability welcome in life. 'Twas almost as if they were one.
Aidan removed the lead and then unfastened Mac's halter and slipped it off his big head. Everything about the colt was big-he stood a bit more than seventeen hands, nearly a full hand larger than the average Thoroughbred.
Aidan could almost see Mac running in the Irish Derby, the woman he'd loved with her shocking red hair and bold ways atop the black colt. Pegeen would have been grinning from ear to ear as she eagerly raced him. But now that could never happen.
From her grave, Sheelin O'Keefe had seen to that.
Despite his brother Cashel's dire warnings, Aidan had taken up with the Irish jockey, and Sheelin's curse had ended Pegeen Flynn's life before she'd had a chance to really live.
Cashel entered the stable, followed by the dark-haired lass he'd seen watching Mac's run with his brother. She was a looker-a natural beauty with lush curves. Not wanting his brother to realize where his mind had wandered a moment ago, Aidan immediately tucked away his thoughts for later.
Giving Mac a peppermint, he shut the stall door behind him and stared at the light in his older brother's eyes, the same McKenna-green as both his own and their younger brother Tiernan's.
"Aidan, our problems are solved!" Cashel said. "This is Catrina Clarke from America. We can have the backing we need to race Mac there."
"And what kind of backing is it you offer from America, Miss Clarke?"
"I'm a breeder and I came to Ireland on a buying trip, to add new blood to my stock. But when I saw Mac Finnian run."
Her breath caught in her throat and Aidan's caught in his. It wasn't just her natural beauty, but something in her voice-something that told him she was more than a businesswoman when it came to fine horseflesh-that seduced him.
Just for a moment.
Then he shook himself free.