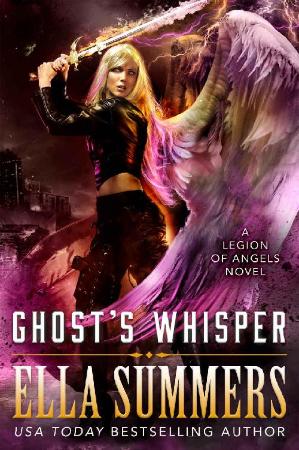 The enemy isn't a monster or a demon this time. It is fear, the destroyer of worlds.

Life has never been better for Leda Pandora, the Angel of Chaos. She is married to the archangel Nero Windstriker, the love of her life. And she commands a vast territory, surrounded by her closest friends and family.

Everything is perfect-until the Earth's magic goes haywire. Now blood has become poison to vampires, witches are being killed by their own potions, and beasts can pass right through the magic barrier that separates civilization from the plains of monsters. And with each new incident, uncertainty and fear are growing stronger in both humans and supernaturals, driving them to violence.

If Leda can't find a way to stop these phenomena, it won't just be the end of all magic on Earth. It will be the end of humanity itself.

Ghost's Whisper is the ninth book in the Legion of Angels series.

The Legion of Angels series


For additional reading in the same magical universe, check out the Immortal Legacy series by Ella Summers.


Thanks for downloading Ghost's Whisper (Legion of Ange Ella Summers :