James McBride The Color of Water 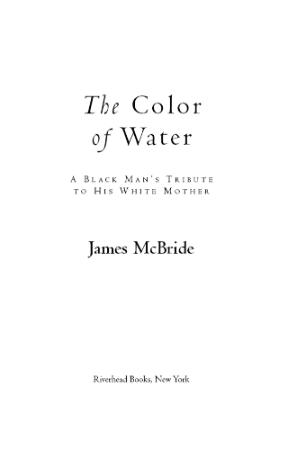 Who is Ruth McBride Jordan? A self-declared "light-skinned" woman evasive about her ethnicity, yet steadfast in her love for her twelve black children. James McBride, journalist, musician and son, explores his mother's past, as well as his own upbringing and heritage, in a poignant and powerful debut, The Color Of Water: A Black Man's Tribute to His White Mother. The son of a black minister and a woman who would not admit she was white, James McBride grew up in "orchestrated chaos" with his eleven siblings in the poor, all-black projects of Red Hook, Brooklyn. "Mommy," a fiercely protective woman with "dark eyes full of pep and fire," herded her brood to Manhattan's free cultural events, sent them off on buses to the best (and mainly Jewish) schools, demanded good grades and commanded respect. As a young man, McBride saw his mother as a source of embarrassment, worry, and confusion-and reached thirty before he began to discover the truth about her early life and...


Thanks for downloading James McBride The Color of Water :