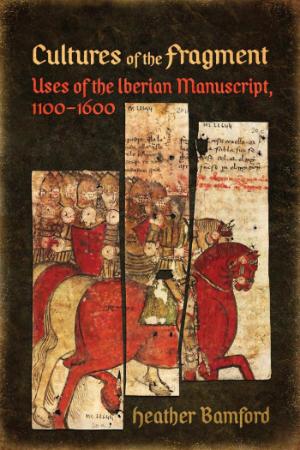 The majority of medieval and sixteenth-century Iberian manuscripts, whether in Latin, Hebrew, Arabic, Spanish, or Aljamiado (Spanish written in Arabic script), contain fragments or are fragments. The term fragment is used to describe not only isolated bits of manuscript material with a damaged appearance, but also any piece of a larger text that was intended to be a fragment. Investigating the vital role these fragments played in medieval and early modern Iberian manuscript culture, Heather Bamford's Cultures of the Fragment is focused on fragments from five major Iberian literary traditions, including Hispano-Arabic and Hispano-Hebrew poetry, Latin and Castilian epics, chivalric romances, and the literature of early modern crypto-Muslims.
The author argues that while some manuscript fragments came about by accident, many were actually created on purpose and used in a number of ways, from binding materials, to anthology excerpts, and some fragments were even incorporated into sacred objects as messages of good luck. Examining four main motifs of fragmentation, including intention, physical appearance, metonymy, and performance, this work reveals the centrality of the fragment to manuscript studies, highlighting the significance of the fragment to Iberia's multicultural and multilingual manuscript culture.


Thanks for downloading Cultures of the Fragment Uses of the Iberian Manuscript, 1100 1600 :